You know those days when you’re in the kitchen, and EVERYTHING goes wrong?  Well, today (and the better part of last night) was one of THOSE days.

You see, I had a massive craving for baked beans.  Not the British style baked beans, but Boston Baked Beans.  So, I grab a recipe book that I have, called The Boston Chef’s Kitchen.  It is a beautiful book, and it has recipes from Boston’s great restaurants.  So, obviously, it being Bean Town and all, I was pretty sure there was a recipe for baked beans.  There was.  But you know when you read a recipe, and you think….hmmm.  There is something missing here, and in this case, a totally incomplete recipe.

Ok, no problem, because, by this time, I am pretty much ready to rework most recipes anyway.  But, simple little things like, the recipe called for 1/2 an onion, but it didn’t specify if it was to be sliced, diced, chopped, grated etc.  No problem.  I diced it.  Then, it also called for 1lb of beans to a measly amount of sauce.  Ok, just add water, it will reduce.  Then it called for you to add the beans directly to the previously mentioned un-watered sauce….which is tomato based.

Now, here is where the real problems started.  I have been making beans since I can remember.  As my family is from Colombia, beans are practically served at every meal.  And we always soak, then boil the beans, THEN add the sofrito (base of tomatoes, onions and peppers).  Against my better judgement, I went ahead and did exactly as the recipe told me.  Place the soaked beans, sans boiling, into this tomato/molasses/onion concoction.  Red Flag number one should have flown, no SLAPPED, me in the face.  You never ever ever place beans with a citric in its raw form, because, alas, as most of you know, they will NEVER soften.  So…..I basically have been trying to make baked beans for the last 12 hours.

Ok, no problem again.  Life-lemons-lemonade adage, I hop down to my local and favorite sausage deli, and decide I was going to use this gorgeous bbq type sauce and make a braised bbq sausage.  This store, apart from amazing high quality sausages, makes a variety of them with different flavorings, such as with black truffle, chinese 5 spice, spinach and pine nuts, foie gras, etc.  But today, stupidly, I chose Coca Cola and Caramelized onion.

WHAT THE HELL WAS I THINKING??????  I mean, I am basically going to braise a sweet sausage in an already sweet sauce.  Duh!!!  But hey, that wasn’t it.  I brought the dang thing home, started to sear it, and I guess since Coca Cola can dissolve a freaking bolt, why would sausage casings hold up to it?  Well, they didn’t.  So, again, I thought, add the sauce and make some mock bbq chili.

Nope.  What turned out was this overly sweetened sausage ridiculousness that ended up in the garbage.  I don’t normally throw away food, but I was so frustrated at the whole fiasco, I just didn’t even want to see it anymore.  Please forgive me.

So, I am now having corn on the cob for lunch, and will leave you with some pretty pictures of my neighborhood and the awesome sausage shop.  Just don’t get the coca cola ones. 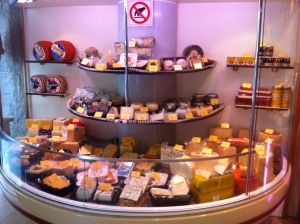 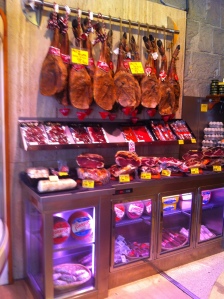