Hello all my lovely friends!  I am so sorry for being away for so long, the last few weeks have been madness I tell you!  Two weeks ago I spent all my days packing up and shipping my things to Madrid, our future new home as of 2013!  And then unpacking them, and last week was work work work and then my big birthday bash on Saturday!

I have eaten and cooked in between, but just did not have any time to post.  Now, I have a whole month with no telly, a couple of pans and some plates and cutlery, a sofa, a bed and a teeny little table.  I have now started “Survival Mode”.  So, it will be interesting to see what I can come up with, now that I don’t have my barrage of culinary utensils.  I kind of feel like when I was in university.  The basics only.  Oh, how spoiled I have gotten since then.  Nary a cookbook, I tell you!

After having unpacked TWO whole households, we needed to eat, and not use any energy whatsoever.  We are completely unfamiliar with our new surroundings, but luckily my cousin lives in Madrid and she clued us in to a fantastic place down the block from our new house.

Tele Pescaito.  Literally translated to: Phone Fishy.  Yup.  Not a very glamorous name, but basically they are telling you that they deliver.  See, the pizza delivery in Spain is called Tele Pizza.

What a great surprise though, on the outside it is really nondescript.  Inside, it’s like you’ve walked into another world. 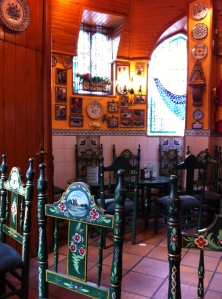 With all of four tables, this place is tiny.  But, it was packed!  People come and go, eating a couple of bites and then mosying off to another bar for another bite.  The walls are covered with photos of bullfighters and ceramics, the chairs are hand painted and so are the tables.  The service, well, it was like being in your friends bar.  We were welcomed as if we had known each other forever.  That was  a really nice change to Barcelona, where service is bare minimum bordering on rude.

Once we were settled and the drinks were ordered, our server brought out our cutlery, with a really nice surprise.

As our drinks were put on the table, so was this:

Beautiful Boquerones (white anchovies) over Salmorejo, which is a thicker version of gazpacho.  This is a real treat, that I am staring to get used to every time I go to Madrid.  When you order a drink at a bar, free of charge, you’re brought out a tapa.  Life is good, friends, life is good.  Topped with some lovely parsley garlic oil, it was a perfect start to a very rustic afternoon of  delights!

The menu to me was mostly incomprehensible.  I have never travelled to Andalucia, therefore, things like panochas, parrochas, puntillitas, chopos, pijotas and the like were all lost in translation.  I look forward to discovering all of these things at my soon to be new local digs!

We ordered some ham croquetas, because I am a croqueta freak.  I was really happy when they arrived, none of them being the same size or shape as the other.  This is the true test of their freshness, and that they just weren’t taken out of a box and dropped in the oil.

These have to be hands down some of the best that I have tried.  They were luscious without being heavy, full of meaty bits of jamon.  Then I decided on having something that I had no idea what I was ordering and I was in for another happy surprise!

I cannot for the life of me remember what they call them, but they are battered and fried squid tentacles.   I love tentacles, always grabbing the legs first when I order calamari.  I was struck by the sheer size of them though, this was a massive squid!  They were chewier than squid rings, but I tend to like that.  Meatier also.  I am sure my blogger friend Chica Andaluza could help me out on the name though!

We also ordered some Flamenquines.

Yes, I admit it looks like a bread coated hot dog.  But looks can be deceiving!  What this is, basically, is Chicken Cordon Bleu’s Badder, Bolder and more Rebellious cousin!  It is a thin steak, stuffed with Iberian ham and manchego cheese!

It was ridiculously delicious!  I can’t wait to have some more soon…..and then I will need to get myself some cholesterol medicine, but hey, you only live once!  By the way, the chips (fries) were pretty spectacular too!

Now, we moved on to dessert.  This also was something that I had never heard of, but I will never forget. 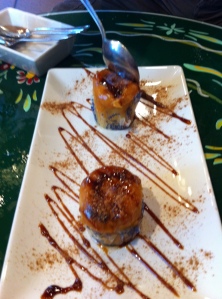 The Pionono.  WOW.  LUSCIOUS.  LIGHT.  MOIST.  RICH.  It’s all of those things all rolled up into one tiny little cake.  This hails from Santa Fé de Granada.  It is a little cake, that is soaked in a light syrup, then topped with cream and lots of cinnamon.  Paolo was triply excited, because he absolutely loves these.  And to think it is only about two minutes walk from our house. We are definitely going to have to up our workout schedule.

Then, the server brought us out a glass of Pedro Ximenez, a truly decadent Sherry, on the house with these delightful little bread sticks! 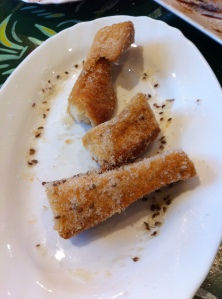 These are fried bread sticks covered in cinnamon sugar and anise seeds.  I love anise seed.  We dipped them in our sherry, and stroked our full bellies.  What a wonderful afternoon.

Conclusion.  They eat a lot of fried food in Andalucia.  But, it is damn good.  We will be back, in fact, I think Paolo has already been back a few times.

So, if you’re ever in Madrid and want to get off the beaten path, take a trip to Tele Pescaito.  Or you can just get some delivered! It is totally worth it!