I haven’t posted  a couple of days, but it’s not because I was neglecting you my friends, I just didn’t want to bore you to tears with the mush I have eaten.  You see, last Sunday I came down with a severe tooth ache,  and all I have eaten is porridge like stuff, or yogurt, or mashed potatoes.   I mean, I assume you didn’t want a post on how to make oatmeal.  Naaaaah. So, I kind of got tired of the blandness, and once my tooth started feeling better, I decided to venture on something a little more consistent, like a noodle soup. But, I was craving taste, and something different, so I picked up this copy of Fine Cooking magazine that I had lying around, and they had this amazing noodle soup on the cover.

I have to admit, this is easy, but it has a lot of steps to it.  So, to further ease the process, I changed up the recipe a little, like instead of cooking my chicken breasts, I bought a roast chicken and used them.  Also, since I love mushrooms, I added a bit more shiitake than called for, and it gave the broth more depth and flavour, it was more umami. 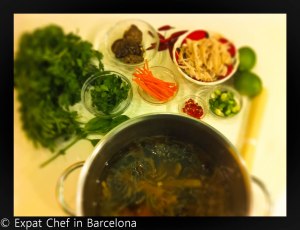 This soup is a cross between Vietnamese Pho and Japanese Udon, and the combination works.  I love the acidity of the lime juice, paired with the earthiness of the shiitake.  And who doesn’t love fresh cilantro and chilies?  (Yes, a lot of people, I know.)

The subtle aftertaste of lemongrass was divine, and every two bites or so you would get this bit of basil.  I really cannot wait to make this again.  It is going to be a staple in my kitchen this winter!

So here’s what you’re going to need:

2 small boneless chicken breasts, butterflied (or use the chicken breast of a roast chicken, or any other pre-cooked chicken you have leftover)

2 stalks lemongrass, trimmed, outer layers discarded , halved lengthwise, and smashed with the side of a chef’s knife.

1 medium lime, half juiced, and half cut into wedges ( I used three… I love me some lime!)

If you are using the uncooked chicken breast, heat a dutch oven over medium high heat,add the oil and add the chicken breasts and cook until browned on each side and cooked through.  Transfer to a cutting board and let cool, and when cool to the touch, shred it with a fork or your fingers.  If you have leftovers, just omit the step and get to shredding!

If there isn’t enough oil left over, add a little more and then add the shallots to the pot.  Sprinkle with salt, reduce the heat to medium and cook, stirring, until the shallots begin to soften, about 2 minutes.  Add the lemongrass, ginger, and brown sugar and cook, stirring, until the ginger and lemongrass sizzle and become fragrant, about 1 minute.  Add the chicken broth and shiitake, scraping up any browned bits from the bottom of the pot, and raise the heat to medium high.  Bring the broth to a boil and then reduce to a simmer.  Let simmer for 15 minutes.  Then turn off heat and let it sit for a while, so the flavours meld.

Meanwhile, bring a medium pot of well salted water to a boil and cook the noodles, stirring, until just tender, about 3 minutes.  Transfer to a colander and run under cold water to cool slightly.  Drain well.

When you are ready to eat, heat the soup up again, add the chicken and noodles to the broth and cook until the noodles are completely tender, about 2 minutes.  Discard the lemongrass.  Stir in the chilies, torn basil, lime juice, and soy sauce; season with more soy to taste.  Divide noodles among 4 large, deep bowls.  Ladle the soup over the noodles and garnish with the scallions, carrot, and cilantro. Serve with the lime wedges for squeezing.  Slurp away!

From my kitchen to yours,

I’ve been going to mosquito for years now.  It is a place I discovered through friends, and what a discovery.  It is possibly, hands down, the best dim sum and authentic Asian food I have tasted here in Barcelona.  It has been, at sometimes, a weekly tradition with a friend of mine, and every time I go, it always delivers the flavours that I am looking for.
It is a small, unassuming space, if you were walking down the road, you would probably pass by it without a thought.  Once inside, you know immediately that the food will be Asian.  Is it the little paintings on the wall?

Or maybe it’s the Chinese newspaper plastered along the wall of the bar?  Or just the smells emanating from the kitchen?  Anyway you realize, it always satisfies, and your wallet will be happy as well.  Never have I paid more than 35 euros, for two people, and that is a lot of food, wine and water included!

Today was like any other day, we ordered the same things as usual.  The only difference was I didn’t order the Peking Duck or the Sichuan Beef, because my friend is vegetarian.  But I did sneak in a tid bit just for myself! 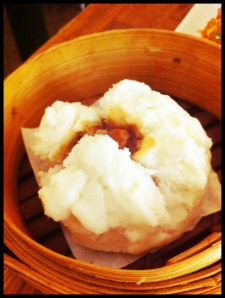 Next up was our Shrimp Shiujiao.  Now, I have to order two of these, because I love eating all six of them on my own.  They are so good, it doesn’t matter how many times I come here and order them, I always, always end up moaning in delight.

They are always made as you order, never frozen, and don’t come from a package.  (As most dim sum here in Barcelona do.)

Of course we had to have our veggies.  We decided on steamed Bok Choy with Shiitake mushrooms, and an order of my absolute favorite….Kimchee.

I can’t get enough of Kimchee.  I know it isn’t Chinese, it’s Korean.  But, one of my favorite things in the world.  I could eat it non-stop.  Really, I could.

Then, our last order was for Thai style Fish Cakes.  My friend Michelle loves these.  She could eat the whole basket, and then some.  And the dipping sauce….a sweet vinegar concoction with fresh sliced chilies…..heaven. 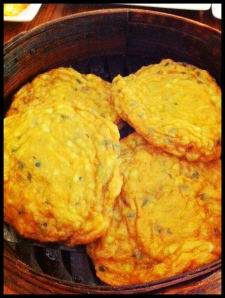 4 glasses of wine, and 2 large bottles of fizzy water….it all came down to an affordable 32 euros.  In Barcelona it is extremely difficult to find such amazing and affordable food!

So, if you’re in Barcelona, and you tire of tapas, try mosquito, you won’t be disappointed!