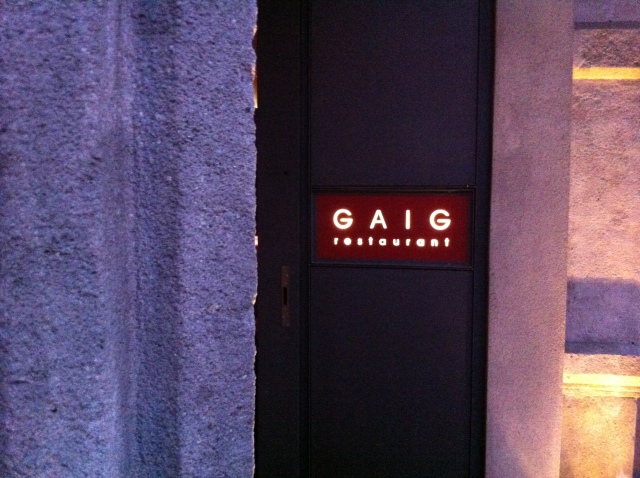 Last night, my boyfriend and I were lucky enough to eat at this amazing restaurant.  I’ve lived here for ten years, and this is the first time I’ve been, and I am so incredible pleased.  I know the now defunct El Bulli changed food forever with the inception of molecular gastronomy, but that has never been nor will ever be my cup of tea.  Yes, I recognize the importance, and have had a lot of fun trying some of the things that they have come up with, but if I never had to eat another foam or spherification of something, I would be a happy girl.  I like FOOD.  I like composite plates of perfectly cooked food, be it simple or complex.  But to give me a spherical olive, that isn’t an olive but tastes like an olive, well, the first time you’re impressed and surprised, the second time, it’s like, just give me the (expletive) olive for God’s sake.

Gaig is not one of those types of Restaurants, and I am so, so happy.  A week ago it was my boyfriend’s “Santo”, which is Saint’s Day.  Here the celebration of your Saint is almost as important as your birthday.  In Catholic tradition, you are generally, if not exclusively, named after a saint, and there is a Saints Calendar which tells you what day your name-saint is celebrated.  Anyhow, I digress.  So, as a present to my man who has almost everything, I took him to Gaig.  We both enjoy food, be it casual burgers and ribs, to places like these.

Gaig can be found in the second floor of Hotel Cram, in the center of what we like to call midtown Barcelona.  It is a small, warm and inviting space, the decor in red, white and black.  It is very calm and elegant.  It’s very much understated, and I believe that it to let the food be the star.  Which it is.

I always like taking a picture of the place setting and the menu before the meal.  It gives me an inkling into the personality of the restaurant.  This was beautiful and simple.  The menu was beautiful as well.

A head of garlic, star anise, the third one looks like an apricot stone, and a vanilla pod.

The house hors d’oeuvre were, from left to right, Ham crisp, Cod fritters, Croquettes, and Wonton chip with parmesan cream and sage.

We started with the wonton, because of the delicate flavor.  The sage was powerful for its tiny size, complementing perfectly with the creamy parmesan.  The cod fritter was creamy and subtle, the ham crisp was just that, a tiny morsel packed with that wonderful Iberian ham, and the croquettes, well that was the best I have ever tasted.  These are simple, Catalan flavors.  Done well, they are truly incredible.  And these were just that.

Our first starter, on the left, creamy scrambled egg with yellow chanterelle mushrooms.  Ok, I have mentioned in the past my love affair with eggs.  For me, an egg is a thing of beauty.  This was a PERFECT scramble, super creamy, the only addition to it was the delicate chanterelle.  Such a humble, yet divine dish.

Next to it was a cold Vichyssoise.  Also perfect in its simplicity.  Food that is well done does not need any smoke and mirrors.  I really applaud chefs that present food like this, because, no they aren’t giving us anything we haven’t tried before, but it shows their confidence that they are giving you the best of an already amazing dish.

Here we have a beautiful and colorful plate.  This was Oyster, mussels, scallops, razor clam with pickled (escabeche) vegetables, with tuna lightly marinated in soy sauce.  I really commend the Chef on this dish.  This dish was über delicate.  The vegetables were almost raw, and there was almost no seasoning.  The accomplishment to this was that the seafood sung.  I have never tasted mussels this good.  The oyster was sublime.  I loved my razor clam, my boyfriend found his too chewy.  In the mix was a little bit of shiso…..and that was just about all the flavor this dish needed.  Shiso is such a delicate and lingering flavor.  It paired well with all the crustaceans without taking away their natural sweetness or briny flavor.  And the tuna.  It was again, perfect.

Meat cannelloni with a Truffle Bechamel.  This, my friends, is what I am talking about.  This is what put Carles Gaig, head chef and owner of Gaig, on the map.  This is heaven on a plate.  I cannot tell you how incredible this was.  If I was at home, I would be running my finger over the sauce to sop up every last teeny bit of it.  It was that good.  Why mess with perfection?  He didn’t.  By far, hands down my favorite dish of the night. 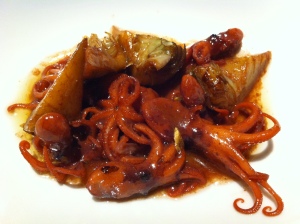 Baby octopus with artichokes in a red wine sauce.  This is a dish that is just fantastic.  The octopus was so tender, the artichoke hearts perfectly cooked.  The red wine was never overpowering but lending it a depth that it could not have had without it.

On the right, is another very traditional Catalan dish called “Suquet de Peix”.  I am not sure how to literally translate, but to sucar is to dunk.  I imagine the reason is because the sauce begs to be dunked or dipped by your fish, potato, bread, spoon….whatever.  This was a perfectly cooked piece of John Dory with potatoes.  The sauce is very rustic, onions, tomatoes and peppers, slowly cooked until their natural sugars come out.  Lightly seasoned with Pimenton, which is spanish smoked paprika.  It was heavenly.  Another one of his triumphs.  Why mess with it, again?

Now we are starting off with the meat courses, the first one is pan seared foie gras, with salsify and a baby red swiss chard leaf. I have never tried salsify, which is a root vegetable.  But it was caramelized, and paired with the foie, along with the swiss chard, it really lightened up the whole dish.  It was equally umami, tart and bitter.  Wonderful.

Our last savoury dish was “Pichon”.  Pichon is a young pigeon that is bred for eating.  Not the street pigeons.  It is a dark, very tasty meat.  But, this was my least favorite dish.  Although the preparation was fantastic, on the left you have the breast that was grilled, and on the right the leg was in confit.  The only thing that made me not enjoy this dish was the sauce.  It was made from the birds own kidneys.  I am not a fan of kidney.  It just reminds me of my mother making me eat kidney as a kid, and as soon as the plate came out, that brown hue just took me back there.  It was delicious, but I didn’t enjoy it, having my thoughts plaguing me with images of me crying as soon as I saw what my mother was putting on the dinner table.  But, to you kidney lovers, this was a very, very good dish.  The kidneys were very delicate, and I am assuming if you love them, you would give this a thumbs up.

Here we have the cheese plate.  This was lackluster, at best.  I love cheese.  But I think that my boyfriend and I have had so many cheese plates, and buy cheese so often, that this just did not measure up to our standards.  By no means was it not good, just not what we have gotten used to.  The plate is amazing.  And the apricot and orange marmalade was fabulous.  But you had to use it sparingly so it would not over power the delicate cheeses, except the Stilton.  And even with that one, it only needed a little bit.  The one to the left was a Petit Nevat.  It’s a creamy goats milk cheese, from Catalonia.  In the middle we had a dry and cured sheep’s milk, which I don’t remember the name.  It wasn’t my thing.  Very reminiscent of a Manchego, which I am not a huge fan of.  And on our right, Stilton.  I love Stilton.  So, obviously this was my favorite one.

When our first dessert was brought out, I was about to cry.  I knew exactly what it was going to be.  A deconstructed Crema Catalana.  I was going to cry not because I don’t like crema catalana, but because I make this on a weekly basis for my cooking classes, and cannot have another bite of it.  But thank God I did.  It was incredible.  On the bottom, Lemon jam.  Middle, caramel ice cream.  Top, catalan crème foam with the caramelized sugar.  Amazing.  Delicious.  I ate the whole thing with reckless abandon.  This is probably the best Crema Catalana I’ve had in my life.

Having said that, the chocolate textures dessert was rather disappointing.  Yes, it was chock full of “African Chocolate”, but it was lackluster and failed to deliver that rich chocolate flavor I so crave and desire when I eat it.  But the dish and presentation was beautiful.  It was a chocolate sponge cake, with chocolate mousse, chocolate ganache, and dark chocolate crisp. 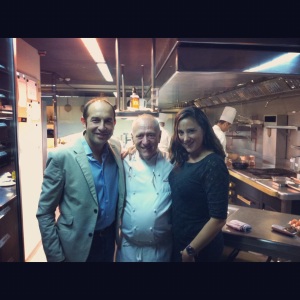 My favorite part of the night, was when the Carles Gaig, the head chef, came to our table, and invited us into the kitchen.  I am definitely starstruck with chefs, as how some people would be with celebrities.  They are my celebrities.

Except for those two teeny things I didn’t enjoy as much, this evening was perfect.  It was a special night for both of us, and it was an incredible meal.  If you can, you must make it to Gaig.